About the Dream Network 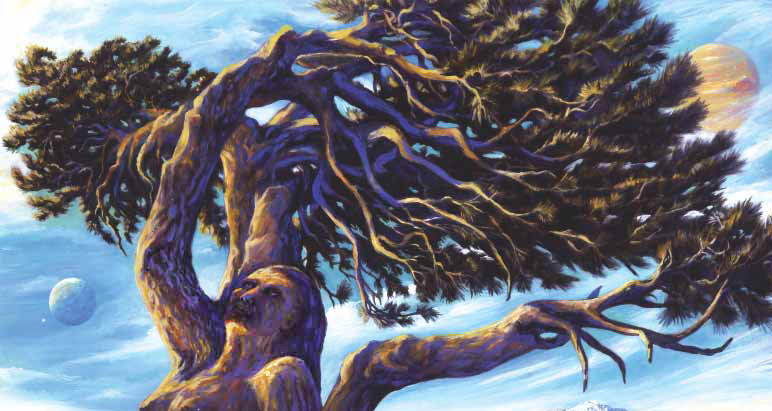 The Dream Network began life in New York City in 1982, edited by the young Bill Stimson. The Network aimed to 'bring dreams back to dreamers' - or as Montague Ullman phrased the idea in one of his early contributions, 'Giving dreams back to the people'.

While the ideas of great dream theorists have been avidly studied in these pages, the final authority on the meaning and importance of dreams always lies with the individual dreamer. The dream has always been regarded as a tool for personal liberation, an object of aesthetic and ecstatic admiration as well as scientific study.

This has meant an eclectic publication that mixed articles with poetry and art, quantitative analysis with personal reflections, and included contributions by professionals and enthusiasts alike. The Network nurtured a network of dreamers and dream groups, a 'dream cherishing culture'.

The Dream Network Journal ceased publication at the end of 2015, but in 2019 Dan Kennedy and Inoshi Denizen teamed up with Roberta Ossana, the journal's editor of 27 years, to bring the wisdom of the journal back to dreamers again. Thanks to our crowdfunding backers, this website allows you to download every issue ever published, and read many articles in blog form.

Thank you to everyone who donated to this campaign. We'd like to personally thank Kelly Bulkeley, whose donation really made this campaign possible, and all the 'super supporters' of the campaign: Luigi Sciambarella, Evelyn Duesbury, Patrick Rathje, Harriette Mandeville, Robert Krumhansl and Dani Tuazon, as well as Arthur Strock, Robert ("Paco") Mitchell, Rosemary Watts-Dreyer, Patti Allen, Mary Bronk, Spoken Stone, and all the supporters who made this a reality. For their donations as well as providing providing their personal copies of DNJ publications, special thanks to Dick McLeester, Marlene King, and Roberta herself.

Thank you also to all the amazing authors and advisors of the Dream Network, and all the editors prior to Roberta:

This is tentatively an 'archive' site of the journal, but we'd also like to experiment with something a bit more living. As of now, if you have any articles you'd like to contribute, please let us know! We will send out a digest to subscribers of the newsletter (signup link in the menu above).

A brief history of the Dream Network

Here's how Roberta Ossana has described some of the journal's history:

"The Dream Network was first published as a Bulletin and appeared in print through the determination of a very fiery and compassionate young man by the name of William (Bill) Stimson. I wrote Bill—who has become a cherished friend—and asked him if he'd be willing to share a few words. Bill's statement is the essence, the Spirit, that guides the Dream Network:

"The Dream Network is not the publication; the enterprise proper isn't a publishing one. To speak the truth of what the Dream Network is about for us is to find our myth, and where else but among our dreams? It is for us to use our dreams in a way that enables us to come together honestly and deeply, for what was broken to be rendered whole again; our community with one another, our connection with our deeper selves, our oneness in purpose, our ability and our resolve to embody the Light itself. What makes the Dream Network special is that it is fundamentally different. People sense this somehow and so they've helped the energy and unfoldment move forward."

During Bill's time, there were other dream-inspired publications coming out in different parts of the country that were Dream Network affiliate publications. One of them was called Fusion. I believe it came out of Seattle. There was another called DreamCraft, which came out of the northeast. There was apparently a big stir of energy happening at the time which has been growing ever since.

Barbara Shor (now departed)—who was a very good friend and part of the original New York dream community generated by Bill Stimson—had this to say about Bill:

"In my mind's eye is Bill Stimson's small, walk-up flat on a hot summer's night... the beginnings of the New York dream community. We never formed a tight-knit group because the people kept changing too often for that. The room was usually crowded...15 to 20 people. Essentially, we knew nothing about dreams, but Bill's enthusiasm and passion for dreams was contagious!

It was a dream whose time had come, like the classic dream of finding yourself in your own home but entering a new room that you've never been in before. We were electrified! This group was the core of the New York dream community and the New York dream community was the core of the early dream movement in the United States. Although we couldn't articulate it at the time, I think we realized that we now had a mission in life. We were converts to dreams. Was it Bill's vision of a global network of dreamers we were envisioning or did it arise spontaneously among us? I don't know, but it was powerful. When Bill got an idea, he didn't rest until he got it out there. He was the prototype of the populist networker, the Trotsky of the dream revolution. It might have happened without him, but it never would have been so fast, so intense, so like a prairie fire in a season of drought. Maybe this was the next step after the revolutionary 60's. That world-changing vision hadn't fully worked, so maybe we had to go back to the inner drawing board, and remake the world from the individual psyche's infrastructure inside out, instead of the other way around."

Bill created and published the Dream Network Bulletin for approximately two years: a 4-8 page publication which came out monthly. Then it came into the hands and heart of Chris Hudson.

Chris and his wife Dale moved to Brooklyn from rural New Hampshire after they got married in 1982 at Windows On the World, top of the World Trade Center, on Sept. 11, 1982. Dale was from Brooklyn and he promised her some "city time." Having been a ‘country boy,’ he said:

“I shortly went nuts and found out about the Brooklyn Dream Community and also the Manhattan Dream Community, where I met Bill Stimson and we attended a weekend leadership training workshop at Monte Ullman's north of the city. Bill was despairing of the Dream Network at the time and wanted to hand it to someone else, so I took responsibility for the publication for a couple of years. I've led dream groups and also studied psychology but dumped the professional side to help Dale w/our kids. I like the term, ‘amateur psychologist.’

“I believe that the unconscious is God and that dreams are the best path to understanding God within and the interconnectedness of all people. Creativity is the blood of God and dreams are nothing if not creative, always in the service of self-awareness, not always comfortably but always accurately.”

Chris was in Brooklyn when Henry Reed and Bob Van De Castle took responsibility for the publication next, in Virginia Beach, Virginia (approx. 1985. I'm not aware of the dynamics that occurred when the publication was making its moves around the country in its early years, but Henry and Bob have shared that even before the Dream Network appeared on the scene, Henry had published several issues of the "Sundance Community Dream Journal," the precursor to the Dream Network Journal and the first published journal declaring that dreams belong to dreamers. The Sundance Journal and Henry's early efforts have had him dubbed "The Father of the American Dream Movement" in many circles.

In approximately 1987, the Dream Network traveled into the hands and heart of Linda Magallón, San Jose, CA.—who had a great deal of support from Bob Trowbridge and Jill Gregory. Linda had this to say:

"Dream Network is a communal project. It couldn't happen without the help of family, friends, and colleagues, without the assistance of volunteers, contributors, and subscribers. Under my tutelage, the most important goal was to assure that new voices would be heard, new visions seen, especially those dreamers who'd not been previously published. They were nurtured and encouraged to dare to dream in the public forum."

In June 1989, literally on summer solstice, I was informed that the Bay Area Dream Workers had accepted my offer to take responsibility for the publication. I KNEW at that moment, how a butterfly feels coming out of its cocoon!"

Roberta stewarded the Network masterfully from 1989 to 2015. In her time she moved from a 24 to 52-page publication, with each issue focused on a central theme. She developed a council of advisors for the journal, and started publishing the journal in PDF form online.

Now please plumb the depths of this collection for wisdom on any dream-related topic that grabs your fancy. This list of Dream Network articles in spreadsheet form might help!