Shoes of the dreamer 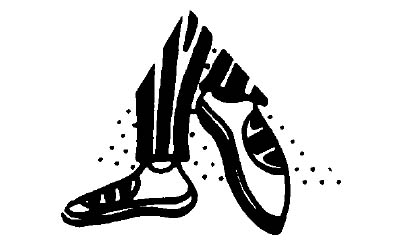 "I open my closet and a torrent of shoes pour out upon the floor."

This dream initiated a research project on the meaning of shoes in dreams. When I placed a call for dreams of shoes in Dream Network Bulletin, 172 dreams were submitted. What type of footprints do shoes leave in dreams?

The most frequent pattern was a dreamer noting shoes having special features. Dreamers found shoes made of volcanic ash, for example, or shoes made from living, walking turtles, shoes with wings, and high-heeled tennis shoes.

The second most frequent pattern was the theme of being concerned about the appropriateness of the shoes being worn. One dreamer tried to walk through snow in high heels. Ronald Reagan sold another dreamer a pair of shoes the dreamer wasn't sure she really wanted. One dreamer complained that the shoes didn't fit appropriately, they were too tight. Another dreamer wore tennis shoes to a fancy ball.

There were many other frequent patterns. Many dreams expressed the theme of an abundance of shoes, such as the dream that. initiated this project. The theme of polishing or repairing shoes was also common. Many dreams involved shopping for shoes. Discovering old shoes was another favorite.

Shoe stories in dreams seem to mirror the shoe situations encountered in life. Shoes with special features seem to be a notable exception.

What do shoes mean to the dreamer? Respondents offered such explanations as understanding, role, adaptation and persona. More generally, we might suggest that shoes represent cognitive schemes, or mental abstractions, used as structures to contain and give shape to experience. They are used as an adaptive tool to help navigate through life situations. Carl Jung once remarked, "The shoe that fits one person pinches another; there is no recipe for living that suits in all cases."

Many shoe dreams reflected a concern for individuality as well as appropriateness. In one dream, for example, the dreamer lamented that all the shoes in the store seemed mass produced and none fit her unique orientation. One dreamer offered this observation, which can be taken both literally and metaphorically: "It's hard to find a good looking pair of shoes that fit comfortably."

Given this concern for functional and appropriate shoes that match the dreamer's individuality, it is surprising that in none of the dreams was there ever mention of making one's own shoes or having custom made shoes . Here is an aspect of shoes from real life that is missing in dreams. What can explain this discrepancy? Perhaps it is because the types of understanding symbolized by shoes aren't the sort we consciously create, but come from the subconscious mind. For example, in fairy tales, it is often the brownies that make shoes for a person while that person sleeps.

One final note: Three dreamers noted that their shoe dreams came at a time of transition. Perhaps when we need to pay attention to our style of adaptation, we think of our shoes.