We are the Stones Dancing: Review of 'Thomas Berry, Dreamer of the Earth' 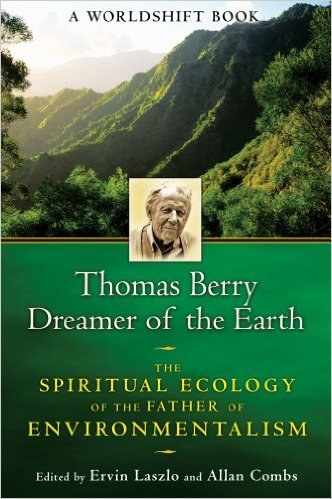 Thomas Berry, Dreamer of the Earth: The Spiritual Ecology of the Father of Environmentalism, edited by Ervin Laszlo and Allan Combs, A Worldshift Book published by Inner Traditions, 144 pp.

What Arne Naess is to the foundations of Deep Ecology, Matthew Fox to Creation Spirituality and Theodore Roszak to a popularization of Eco-Psychology, so is Thomas Berry to Environmentalism and Eco-Theology. Berry stands forth as a beloved uber-champion of the Great World—the eco-shamanic, holistic, global alchemy of our time—as a leading worldshift and crisis necessitated re-Earthing pioneer, serious celebrant of the “spontaneities within us,” cosmologist and pathfinder, dreamer of responsibility, visionary of maturity, defender of biotic democracy. Berry referred to himself as a “geotheologian.” This volume not only showers accolades on the subject but shows how easy it is to love the man through his dedicated genius as well as his life of wonderment, humility and honesty.

Here is an impressive way of opening the door to the unfamiliar or revisiting the devoted work of Father Berry, an American monk of the Passionist order. The book, a small cornucopia, contains a significant forward and ten essays from engaged contributors. As Thomas Berry is personally highly regarded, I hasten here and delve directly into extensive quotations from the forward and the single essay chosen for highlight. I trust that my evaluation will provide a fertile parcel of common ground.

Thomas Berry, Dreamer of the Earth is edited by Ervin Laszlo, twice nominated for a Nobel Peace Prize and founder of the Club of Budapest, and Allan Combs, professor at the California Institute of Integral Studies. Let me begin opening the pages with this from Dr. Laszlo’s Forward:

“Clearly we are facing critical problems, but what is it that needs to be done? Berry’s advice remains clear and timely. Basically he tells us, ‘What we need, what we are ultimately groping toward, is the sensitivity required to understand and respond to the psychic energies deep in the very structure of reality itself…”

“Accepting the spontaneities of the universe, calls for a vision that is dreamlike. Imagination functions most freely in dream vision, and so we tend to associate creativity with dream experience. ‘The dream comes about precisely through the uninhabited spontaneities of which we are speaking,’says Berry. ‘In the beginning was the dream. Through the dream all things were made, and without the dream, nothing was made that has been made.’…”

Of course it is to be understood that this dream—dream of Earth and dream of creation; the cosmic dream—is the divine dream. This in turn brings into reference one of the books of bodywork psychologist and physicist Arnold Mindell, The Dreammaker’s Apprentice.

Continuing from the Forward:

“It is through a complex, continuous and subtle interaction that we maintain ‘our intimate presence to the function of the earth community and to the emergent process of the universe itself.”

“Berry’s basic insight remains entirely valid. ‘The present situation is so extreme that we need to get beyond our existing cultural formation and back to the primary tendencies of our nature itself, expressed in the spontaneities of our being.'”

“The brightest glimmer of hope shimmering at the darkening horizon of the current global crisis is, in Berry’s words, that ‘the universe is revealing itself to us in a special manner just now. Also the planet Earth and the life communities of the Earth are speaking to us through the deepest elements of our nature’.”

To encounter the phrases, in the beginning was the dream; the primary tendencies of our nature itself, the spontaneities of our being, is to feel a deep excitation and arousal that engenders hope while even more impressively demanding dedication.

Next, the essay I have chosen to look into is INSCENDENCE—The Key to the Great Work of Our Time (pgs 42-71) by Bill Plotkin. Plotkin is a depth psychologist and wilderness guide, author of Soulcraft and Nature & the Human Soul.

The term Great Work may be familiar from alchemy and variations played out by Jung and his followers. Inscendence, however, is a word requiring definition. Plotkin (following Father Berry) gives us this: “Inscendence”—as over against the other worldliness of transcendence—is ‘sinking back into the source of everything,’ during which we no longer belong to the world in our old ways… There in the presence of ‘the source of everything’ we hope to be suffused by and informed by what Berry calls ‘the guidance and the powers of the Earth’.”

This has to do with Earth’s organically creative intelligence, of which we are told, “The dream of the Earth, the pull of numinous gravity, draws us down toward ‘the heart of the world.’ By means of this communion, we can re-member ourselves, enabling us, when ripened, to ‘rise up rooted, like trees’.”

Of the inner-downward-evolutionary-re-connectivity of Inscendence, as praxis in the world and with the Earth, we have this:

“Inscendence practices… support the individual to cooperate with, to surrender to, the pull of the dream of the earth, also known as the call of the soul. This descent is experienced as a psycho-spiritual dying. We must die to our old ways of belonging to the world to enable us to uncover something radical, something new, something we could never have rationally deduced, something that our lives depend on.”

It is not possible to overemphasize the importance or urgency of this statement. As we look over the condition of the planet, who can deny the pressing of the issue, signs of a gathering storm, nearing horizon of an event of cataclysm, and the extremity of risk at which we are putting human existence and life itself? Even former skeptics in the scientific community are revising or reversing their prognosis due to accelerated environmental imbalance and changes.

Bill Plotkin also applies the defining of Inscendence to Thomas Berry’s reflections on the re-emergence of shaman and shamanism, that which in my own writings I have come to call green troubadour, eco-shaman and the eco-shamanic. Here then a further set of book quotations, beginning with Father Berry himself:

“More than any other of the human types concerned with the sacred, the shamanic personality journeys into the far reaches of the cosmic mystery and brings back the vision and the power needed by the human community at the most elemental level. The shamanic personality speaks and best understands the language of the various creatures of the Earth.”

“So far in this passage it seems that he (Berry) meant the realm of vision to be the domain or mission of the presumably rare individual in a society, the shamanic personality. But then in the very next sentence, ‘Not only is the shamanic type emerging in our society, but also the shamanic dimension of the psyche itself. In periods of significant cultural creativity, this aspect of the psyche takes on a pervasive role throughout the society’…”

“Whether or not the healthy societies of the past were replete with mature members who experienced and embodied revelatory vision, I believe, along with Thomas, that this is both possible and necessary in this century if we are to successfully reinvent the human.” (Reinventing the human at the species level is a major component in Berry’s Ecozoic challenge.) “Sustainable societies, at this turning point in human and Earth’s evolution, will come about through neither human rationality nor the vision of a few individuals alone but through the pervasive emergence of ‘the shamanic dimension of the psyche’. Although the vision of the one can catalyze the many, the vision of each is needed to build the new cultures.”

Spontaneously I am inclined to shouting out an energetic, resounding (green) hallelujah of affirmation to the foregoing expression. Indeed, Bill Plotkin’s essay is superlative in a volume that is reader worthy and excellent from start to finish. Space does not allow me to do equal justice to the contributions from Joanna Macy, Duane Elgin, Stanley Krippner, Geneen Marie Haugen, Matthew Fox and the others. Rather, I must leave the now engaged reader with but scant few provocative quotations.

Thomas Berry: “Foundations of a new historical period, the Ecozoic Era, have been established… The mythic vision has been set into place… The dream drives the action. In the larger cultural context the dream becomes the myth that both guides and drives the action.”

And: “The greatest single need for the survival of the Earth or of the human community in the twenty-first century is for an integral telling of the great story of the universe. This story must provide in our time what the mythic stories of earlier times provided as the guiding and energizing sources of the human venture… The three basic tendencies of the universe at all levels of reality are differentiation, spontaneous self-organization, and bonding. These tendencies identify the reality, the values, and the directions in which the universe is proceeding.”

Of course for a portable—and tender, joyous—touchstone of Thomas Berry as pathfinder and fellow Earth-walker, one need go no further than to recall the most enchanting and memorable of his discoveries and reflections. In these five words—a comfortable fitting into a human palm—Father Berry’s ecosophy: “We are the stones dancing”.