Book Review: The Dreamer’s Book of the Dead by Robert Moss 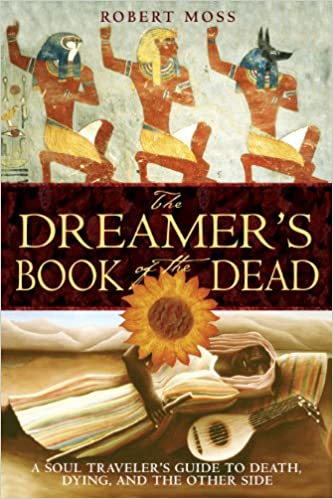 The Dreamer's Book of the Dead: A Soul Traveler's Guide to Death, Dying, and the Other Side (Destiny Books, 2005, 320 pages

Two of Moss’s strongest points are that Imagination is a necessary and vital element of the afterlife—and—dreaming is our most direct access to learning about and preparing for life after physical death. But Western culture tends to view Imagination with the same suspicious and disapproving eye it uses on dreams/dreaming. Consequently, our understanding of the afterlife is vague, incomplete, and constricted. Both the dead and the living in Western culture suffer from a lack of information. This book endeavors to provide some practical tools and guidelines to “help us heal our relationship with death and dying.” It is a relationship sorely in need of healing. The first section, Dreaming with the Departed, draws on dreams and tales of the afterlife from other cultures as well as contemporary dream reports. While reminiscent of Patricia Garfield’s The Dream Messenger, Moss offers an expanded view of this type of dream. He explores not just the common themes and messages in such dreams but also lays a foundation for deeper and more conscious dialogues/interactions between living and dead. Yes, the dead visit us in our world, via dreams, but we visit them in their world as well, gaining our own glimpses into the bardos beyond. There is a process, a path, a pattern to the afterlife, and different kinds of energy and consciousness survive physical death. Sometimes the dead need help from the living. Many don’t know they have died, for instance, or we hold them too close or too long and they remain earthbound longer than they might have otherwise, or they don’t know (because of beliefs held during physical life) that they can go on. Dreaming of the dead is part of the dying/death/healing process for both the living and the dead and Moss offers specific suggestions for the living which assist both living and dead – not just ‘feel good’ rituals, but practical matters such as sudden or violent deaths, unburied/missing bodies, the dense energy body of the ‘stuck’ dead, entanglement with this denser energy, etc.. Moss reiterates the necessity of imagination in the afterlife (“…lack of imagination is one of the main reasons people get stuck on the other side of death”). It is the key to a deeper dialogue between the living and dead, and a necessary element in a Western Book of the Dead. Ultimately, Western culture benefits from a more active and conscious communion with the other side of the veil.

If The Dreamers Book of the Dead stopped after Part One, it would still be a valuable addition to any dreamworker’s library. It doesn’t stop, of course, but continues with an exploration of The Poet as Guide to the Other Side. Here, Moss describes his interactions with and guidance by the spirit of W. B. Yeats, an early Twentieth Century poet whose own efforts at writing a Western Book of the Dead resulted in A Vision (1925 & 1937). He learns more about the afterlife through a variety of experiences (dreaming, shamanic drumming/journeying, travels to and visits from others who had died, etc.), with Yeats as his guide much as Virgil was Dante’s guide. There are numerous references to other individuals and groups who have traveled this path in earlier times (the Victorian era, for example). This section provides much of the larger context which ties the other two sections together. Throughout the whole of the book, as well, are poems and stories from other cultures which further bring us from where we are to where we could be in our own culture’s relationship to death and dying.

Dreaming the Way from Death to Birth is where we are headed in finally creating a Western Book of the Dead. Here are tools and guidance to help us truly begin to heal that relationship with death/dying. By learning (and helping others learn) how to prepare/maintain our personal ‘houses of death’, we can be ready when it is our turn. Stories from many dreamers and many traditions, as well as descriptions of Moss’s own experiences and what he has learned, make up much of this section. Several short meditations are offered as examples to help in visualizing different ways of starting on your journey after death. A brief summary of common ‘steps’ found on the other side is also given, though individual experience will, of course, be shaped by one’s own beliefs and expectations about what is on the other side. Reincarnation is touched on as well, as are some other ‘non-western’ concepts (being alive in more than one time period at once, for example).

At the end of his book, Moss offers additional resources, provides a description of his Dream Re-entry technique (most helpful in further exploring those dreams with the dead), and presents a very extensive bibliography with authors both ancient and modern and in a variety of fields (including Garfield’s Dream Messager). This may not be the final incarnation of a Western Book of the Dead, but The Dreamer’s Book of the Dead a really nice start. ∞